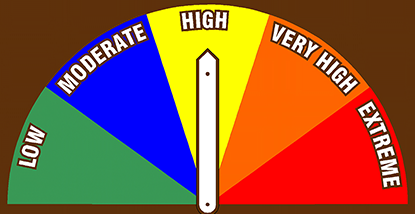 I don’t want to be alarming, but we have a code yellow fish living in the Potomac River. To be clear, this fish is not actually yellow, like a yellow perch. Rather its yellowness corresponds to the level of threat that it poses to the public.

It’s like the yellow in the color code system invented by legendary handgun expert and advocate Jeff Cooper. His aim was to help home defense enthusiasts define levels of mental preparedness needed to fend off a potential attack. In a state of code yellow you are aware that you are living in a dangerous world, particularly if you’re in an unfamiliar place among people you don’t know. Keep your finger close to the trigger.

Clearly, there’s nothing wrong with being prepared for the worst. We owe our existence today to distant code yellow ancestors who kept their spear no more than an arm’s length away, ready for the saber toothed tiger that could be lurking behind the next tree.

But mental preparedness can also mean questioning the threat levels themselves. Is the threat real? And if it is, what can I do to defend myself?

The code yellow fish we will meet can help answer these questions. As we’ll see, this fish is not just the target of warnings issued by governmental and scientific authorities, but it is actually issuing warnings of its own by gleefully changing colors like a chameleon. Much like a trickster, our code yellow fish is inviting us to examine what we believe to be true and why we believe it.

Burt the Turtle. First lets take a short journey through the history of code yellow, at least in my lifetime. It started with Burt the Turtle and “duck and cover.” While it sounds on the face of it like wetland ecology,the subject was deadly serious:  surviving a nuclear attack.

It was back in the 1950s in Roaring Brook Elementary School. The teacher turns on a flickering movie called Duck and Cover. There’s Bert, an amiable cartoon-strip turtle. Burt says that when you see a nuclear fireball, you must duck and take cover. He demonstrates by pulling his head and legs into his shell. When the emergency drill alarm sounds I dive under my school desk and huddle there until the all clear. As people say now, the 1950s was an idyllic time in the life of our country.

Thankfully the little wooden desks were never put to the ultimate test. But 50 years later, 9/11 put the government back in the business of preparing Americans for the worst. This meant creating a system of five colored bars stacked one on another, each of which represented a level of terrorism threat, from green (low) to red (severe). The warning level never dropped below yellow, which stood for a significant risk of attack.

The color code system didn’t go well. People wanted to know why the threat increased from yellow to red, and then back again. Did the government have some actual information? And how are we supposed to react to the threat? Find a school desk and crouch under it? Worst of all, the color codes became the butt of late night comedy shows, such as when Saturday Night Live hosted Homeland Security Chief “Tom Ridge.”

Arming up. Then came the Obama administration, and millions of Americans again scrambled to face a new code yellow alert. The government will take away our guns, the NRA warned them. Firearm sales skyrocketed, assault rifles doubled in price, and ammunition grew scarce and sometimes unobtainable. Men—and women!—flocked to self-defense schools. All across the country otherwise sensible people put loaded handguns in to their night table drawers to fend off criminals, terrorists, aliens, or whatever.

We now have a president whose hair shifts between yellow and orange, like a squid signaling the presence of a predator. We face grave threats, Trump tells us. Waves of Islamic terrorists are crossing our borders. Mexican rapists are hiding in our alleys, behind every dumpster. NAFTA is taking away our jobs and replacing them with Mexicans and robots. We’re afraid, some of us because of the presumed threats, others because of the man delivering the warnings.

Enter the snakehead. A native of China, the Northern Snakehead turned up in Maryland pond behind a shopping center in 2002. Unlike the threat of nuclear war, terrorism, or saber toothed tigers, it was never really a threat at all, at most a code green. Like other immigrants, snakeheads found their place in local ecosystems. Fishermen learned to love them, Great Blue Herons liked to eat them, and snakeheads proved tough enough (like Mexicans) to live where most other fish would turn belly up.

But no matter, government and the media teamed up to paint the snakehead as a code yellow fish, right up there with Jaws and the toothy terrors of Animal Planet’s River Monster series.

A Baltimore Sun reporter was first out of the gate. “Torpedo-shaped and aggressive,” she described the snakehead. They “lurk in the deep [they actually prefer very shallow water],” she continued, “and gobble up every other fish in sight [yup, this is what most fish do].” It gets worse. The snakehead, she wrote, “will make quick work of native freshwater fish: white suckers and largemouth bass, sunfish, bluegills and crappies [all of which are non-native except for the first].” The clincher was that they breathe air and can live out of the water for a long time (true) and that they walk on land (they can’t).

Other reporters piled on. Under the headline “Freakish Fish Causes Fear in Md,” Washington Post reporter Anita Huslin dubbed the newcomer “Frankenfish.” She quoted a Maryland government biologist:  “It has no known predators in this environment, can grow to 15 pounds, and it can get up and walk. What more do you need?”

“Ferocious,” said the Milwaukee Journel Sentinel, “Voracious,” said CBS Evening News, “Most-Wanted,” said Newsday, “Fish from Hell,” was the front page headline on the NY Daily News front page. “Terror from the Deep,” said the Bangkok Post, which should have known better since Thailand is part of the snakehead’s original range.

‘They are coming for you.’ It probably didn’t help that the snakehead looks the part, as in, “Do you want something like that leaping out of your toilet bowl?” Its snaggly teeth and elongated body evoke our worst suppositions. Remember the animated film Finding Nemo? The snakehead is no Nemo.

Movie producers caught the scent. In “Frankenfish,” a human-eating monster is eventually killed in a plot reminiscent of Beowulf, except here the spinning blades of airboat perform the coup de grace rather than a magic sword. In “Snakehead Terror” fish pumped up with human growth hormones eat people and anything else in their way. The trailer: “They hide in the depths. . .they feed on your fear. . . and they are coming for you.”

In Swarm of the Snakehead, genetically engineered monster fish got tired of eating dogs and cats and went upscale to human flesh. (Reader beware: This film was billed as a comedy.) Any resemblance of its title to the previously published German science fiction thriller “Der Swarm,” (also about really angry fish) is undoubtedly a coincidence.

Wanted dead, not alive. Local fisheries biologists joined in. A Maryland Natural Resources website tells fishermen to kill any snakeheads they catch by “decapitation, evisceration, cutting out its gut or pulling out its gill arches,” raising the question who we should fear the most, snakeheads or fisheries biologists. Federal law imposed penalties for transporting or importing live snakeheads, including fines up to $200,000 and prison sentences up to five years. Authorities nailed wanted posters at waterway access points.

Nevertheless, snakeheads continue to extend their range. One Maryland biologist described a section of the canal that runs along the Potomac a “snakehead nursery.” From here, the fish could breach the inlet lock and invade the entire river system.

Tactical baseball bat. This same section of the canal became code yellow ground zero at a Snakehead Derby held last year by the state and its federal partners. The idea was to catch snakeheads and kill them.

The 100 or so fishermen I saw at the derby didn’t look much in a code yellow mode, although one did carry an aluminum baseball bat in addition to his fishing gear. They were just curious and eager for a chance to catch this now-famous fish. Only one succeeded, goading the fish to strike by fluttering a live worm in front of its nose in an imitation of an artificial plastic worm.

I walked upstream to the canal’s inlet lock. Down below my feet was a pair of massive wooden doors, the canal on one side, the river on the other. Across the river I saw a giant American flag ruffling grandly in the breeze. This is the Trump National Golf Club, the same Trump who vows to build a wall to keep out immigrants.

The wooden doors certainly looked formidable, solidly attached to fortress walls of stone and resolutely closed. But staring at the murky water below I could picture two small snakeheads—probably young dreamers (those Mexicans again)—moving slowly but determinedly against the gentle current. They approach the gate and hesitate for a moment at the spot where the two mighty gates come together—though not completely together. One fish winks to the other, and through the crack they go, up into a new waterland of opportunities. 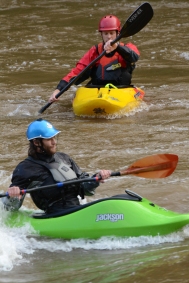 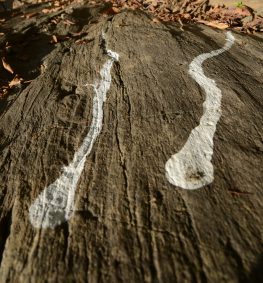 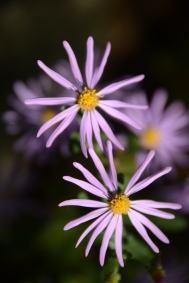 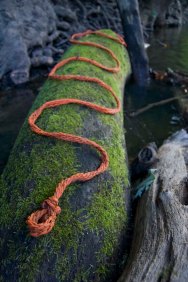 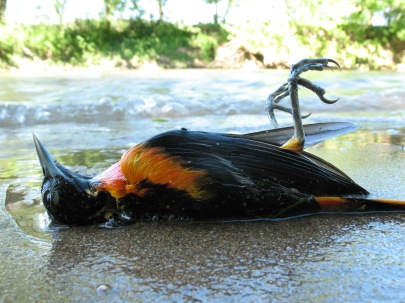 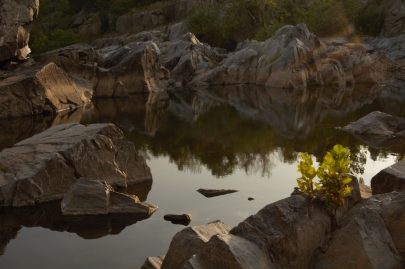 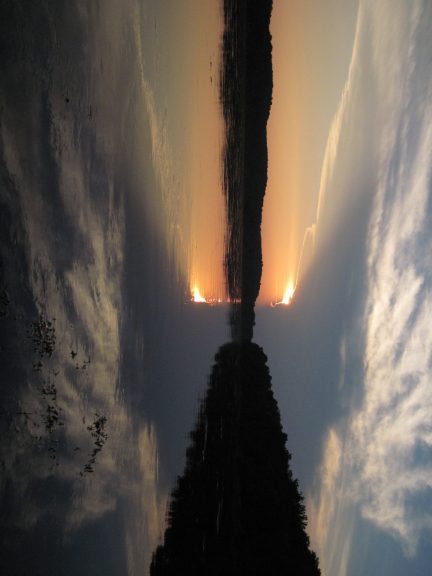 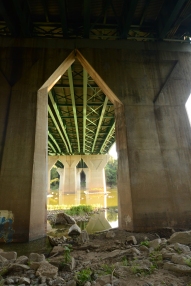 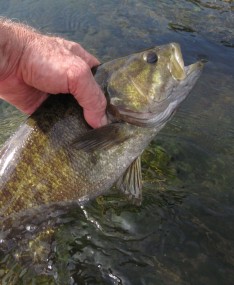 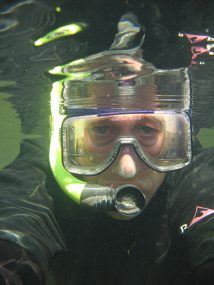 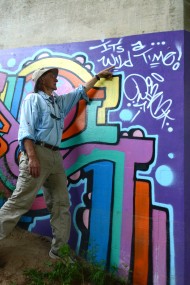 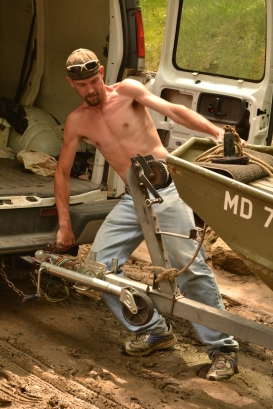 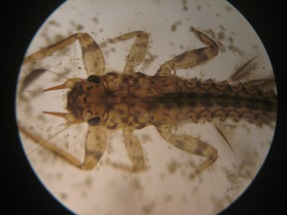 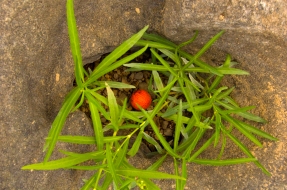 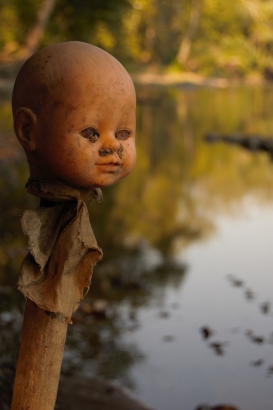